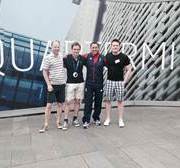 Joining our client Quartermile Ventures Limited for a carpet curling competition in aid of The Sick Kids Friends Foundation on Thursday 26 June, we found our fundraising and competitive levels were at a high!

With 64 teams competing, we valiantly battled our way through, winning all of our six group matches. Sadly we weren’t final champions but were proud to make it to the last 16 before being knocked out. Most importantly the fundraising event for The Sick Kids Friends Foundation was a great success!

The Sick Kids Friends Foundation was set up in 1992 to support the work of the Royal Hospital for Sick Children in Edinburgh. The Hospital receives over 100,000 children through its doors each year from all over the East of Scotland and they raise around £1.5 million to help children and families at the hospital. All the work is funded through donations from the public, companies, Trusts and Foundations and organisations who wish to help make the Sick Kids even better.

A photo opportunity with the British men’s curling team captain, David Murdoch, was not to be missed! Left to right: Brian Donaldson, Stephen Clark, David Murdoch and Jonathan Riddell (Jim Hendrie from T&A was also part of the team).

Supporting a good cause and picking up the spoon!