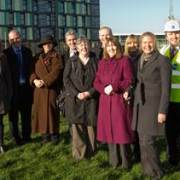 Following on from the successful Portobello High School sod cutting last month, T&A were delighted to join the team for the sod cutting event to mark the start of construction work at the new Boroughmuir High School, which will be built in Fountainbridge, Edinburgh.

Dr Alasdair Allan, Scottish Government Minister for Learning, who was the guest of honour for the official ceremony on the site, was joined by pupils and staff from the school, contractors and The City of Edinburgh Council Education, Children and Families Convener Cllr Paul Godzik and Vice-Convener Cllr Cathy Fullerton.

Partly funded through the Scottish Government’s Scotland’s Schools for the Future programme, which is managed by the Scottish Futures Trust, it’s due to open its doors to pupils August 2016. Situated 500m away from the current site at Viewforth, the design for the new school includes teaching areas arranged around a multi-functional atrium, traditional classrooms offering easy access to collaborative break out areas, and enhanced facilities for physical activity and external learning, including a unique roof-top multi-use external games area.

Cllr Paul Godzik said: “It’s great to see the first phase of construction work starting on the new school as pupils, parents and teachers have been waiting a long time for this special day.”