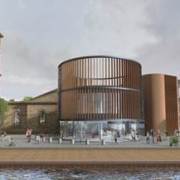 Glasgow City Council has approved a planning application, submitted in October 2013, to establish a new craft Scotch Whisky Distillery, The Glasgow Distillery, and Visitor Centre on the banks of the River Clyde Single Malt Distillery at 100 Stobcross Road.

The £10 million project will transform the iconic Pump House building, which sits between the Riverside Museum and the Hydro Arena in the west end of the city, creating up to 300 jobs during the construction phase and helping to continue the regeneration of this part of the Clydeside area, providing at least 25 new permanent jobs upon completion. The Glasgow Distillery is planned for completion by autumn 2015.

“The city was once home to many whisky distilleries and we think The Glasgow Distillery will put Glasgow right back on the Scotch whisky map.”