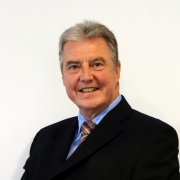 James, who will be based in the company’s Haymarket office in London, is responsible for raising the profile of the South East team with both public bodies and private sector developers.

The move follows Thomas & Adamson’s senior partner, Alastair Wallace, being named as one of three new board members of RICS Scotland earlier this month. As head of the 160-strong business, which has offices in Edinburgh, Glasgow, Abu Dhabi, Dubai, Portland, Kyiv, and London, Alastair will provide market insight and intelligence to enhance the recognition and profile of RICS throughout Scotland as well as to enhance local member engagement.

The company, which has secured significant contracts with blue chip developers in recent months, also leads vital monitoring work at the Chernobyl Nuclear Power Plant in Northern Ukraine for the European Bank for Reconstruction and Development (EBRD). The £2bn project is set to be handed over to the EBRD later this year.

“Vincent is joining the company following a sustained period of growth and will be crucial in our expansion in and around the capital. Whilst our heartland is north of the border, our goal is to see the South East arm double its income over the next five years, and Vincent will play a key role in delivering this increased turnover.

“His strong track record of delivering meaningful growth, through strategic planning, will be a fantastic addition to an already strong and effective team.”