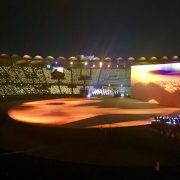 The celebrations, taking place on Sunday 2nd December at Zayed Sports City in front of a crowd of 22,000, will see T&A involved in the contractual, cost management and budgetary control for the event, that will mark the 47th anniversary of the creation of the United Arab Emirates.

This year’s production, ‘This is Zayed. This is the UAE’ is particularly significant as it brings to a close the ‘Year of Zayed’ celebrations, marking the centenary of the birth of The Late Sheikh Zayed Bin Sultan Al Nahyan, the country’s founding Father. The show will feature live performances, light effects, inspirational readings and visual art.

Andrew Mason, Director of Strategic Advisory Services based in Thomas & Adamson’s Abu Dhabi office said: “Due to the scale, relative complexity and unique nature of the show, it has been vitally important during each stage of the project to ensure that any contractual risks were mitigated whilst maximising the available budget.”

Rudolph Van Wyk, Director of Cost Management based in Thomas and Adamson’s Dubai office added: “It’s an honour for Thomas & Adamson to be involved in a project of such national importance during the Year of Zayed. Working with creative and production partners in a spirit of mutual trust, understanding and co-operation for a knowledgeable and respected client has been a privilege.”