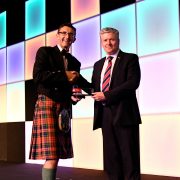 Thomas & Adamson has won the inaugural MEED Editor’s Award for Special Achievement for its project, ‘The Founder’s Memorial’ in Abu Dhabi.

The “Constellation”, a memorial to the UAE’s Founding Father, the late Sheikh Zayed bin Sultan Al Nahyan, was developed over a two-year period by Thomas & Adamson and unveiled to the public in April 2018 to coincide with the Year of Zayed, a 12-month series of events commemorating the centenary of his birth.

As one of the most prestigious projects the company has ever worked on, The Founder’s Memorial is intended to promote feelings of empathy and understanding of the late leader amongst Emiratis, expatriates and tourists visiting Abu Dhabi’s “must see” attractions, whilst safeguarding Sheikh Zayed’s vision and legacy for generations to come.

Les Banks, International Partner at Thomas & Adamson, said; “It’s been a great honour to be a part of such a significant project over the past four years, and to have the opportunity to be involved in the creation of a lasting monument to the Founding Father of the UAE. For this to be recognised by winning the first ever MEED Editor’s Award for Special Achievement is fantastic and testament to all our hard-working staff who have contributed to our success in the Middle East over the past 10 years.”

Richard Thompson, Editorial Director of MEED, added; “The MEED Editor’s Award for Special Achievement was awarded to Thomas & Adamson for a project that is so original and innovative, but which is so unusual that it defied our ability to judge in our regular criteria. In particular, the judges were impressed by the precision engineering and use of new digital technologies without which this project could not have been delivered. They were unanimous in their desire to make this special award.”

The accolade is the company’s second decoration for the project, having recently been awarded the best Social, Cultural and Heritage Project of the year award for the Emirate of Abu Dhabi.

Building Magazine: A deeply weird day out – when Will Ing went to Che...
Scroll to top