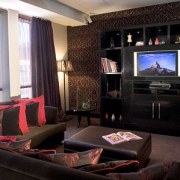 Thomas & Adamson continue their success in both the ongoing regeneration of Dundee Waterfront and also the delivery of hotels, following the handover of the new Malmaison Hotel, Dundee.

Malmaison Dundee was formally opened to the public on 10 February 2014, following an extensive renovation, remodelling and refurbishment of the existing Grade B listed building, which was originally constructed by the Mather family and opened in 1899 as the Mathers Hotel.

Thomas & Adamson provided full project and cost management and health and safety services to the present owner of the hotel, which is now leased to Malmaison.

Thomas & Adamson has continued their ongoing relationship with Malmaison Hotels with Malmaison Dundee becoming the most recent and the thirteenth hotel in the boutique hotel chains stable. Works are also now well under way on the redevelopment of the former Scores Hotel in St. Andrews. This will shortly re-open as a new luxury Hotel du Vin, part of the Malmaison Hotels group.

The completed hotel is now a spectacular addition to the chain, a first class addition to Dundee and a cornerstone for the ongoing redevelopment of Dundee city and its waterfront.

Grant Millar, Head of Hotel and Leisure at Thomas & Adamson, said: “We are delighted to have been involved in such a demanding, but successful project and to continue our relationship with Malmaison Hotels and Hotel du Vin. Transforming the derelict Mathers Hotel to provide such an outstanding and spectacular luxury hotel, whilst protecting and enhancing the building’s historic fabric, has been a real showcase project for Thomas & Adamson.”

Thomas & Adamson are now open for business in Dubai